It Takes Only 1/8th Of A Second To Look Special 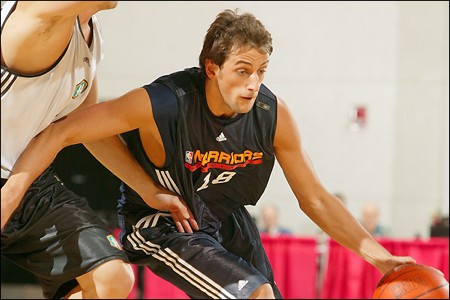 I’m always scavenging for images (i.e. pics or video) that capture a concept or point… well, here it is.

A quick flutter of a camera’s lens takes an 1/8 of a second. This snapshot is taking what on all accounts is a special player, Marco Belinelli (2007 NBA 1st Round pick, 18th overall), and making him appear less than.

Oh well, it’s for the greater good. Marco’s misfortune is my good fortune.

You see what I love about this picture is that it has captured one of the most common problems that players face: the split second when an athlete’s eyes go down when executing their skills, is the precise moment when critical decisions need to be made.

Yup… that’s it. Watch each player’s eyes—with and without the basketball.

STAND ON THE BASELINE

When coaching during your basketball practice, have an awareness for where you position yourself on the court and why.

I learned a number of years ago from Italian coach Mario DeSisti that it’s best, whenever you’re assessing the offensive tendencies of players, to stand along the baseline.  On the other hand, if you’re observing defense, stand at half court and look into the play.

The eyes of players – both on offense and defense – tell you a lot about the decision making ability.

For coaches looking to better utilize their assistants, managers or players not in a drill, be intentional about where you ask them to position themselves. And, beyond that, be specific about what you’d like them to observe.

Give it a try and let me know what tendencies you observe.