The NYTimes.com featured and article, “It’s a Vision Thing for Nash in Soccer and Basketball.”  To be frank, it’s not an overly enticing read, but what jumped out to me was something that I’ve been toiling with at length for quite some time: vision.  And, how to teach it.

In the article, Claudio Reyna, long-time fixture on the United States national soccer team, says that what makes Steve Nash so special in soccer – as well as in basketball – is his vision.

Is Vision A Skill?

Is teaching vision a trainable skill?  And, if so, where in the teaching progression is it best introduced?

Now, I’ve been in many a practice – youth basketball right through the NBA – and have overheard the usual bellow of a coach reminding the athletes to keep their “eyes up” during drills.

But, where is eyes up? Is it the roof? The rim? The wall?

And, more importantly, what should they be looking for?

A Reminder Taken From Tennis

One of my secret joys is tennis. So, when My Lady suggested we “go hit” the other day, I jumped at it. Little did I know she meant, we were going to play tennis on the beach (…literally!).  She’s played with (and attempted to coach) me in previous years; and, she realized the the one thing I needed to improve was my control.  Beach tennis was the perfect place to do it because the ball has to stay airborne off the sand and be returned directly to your partner.

In my usual way, I struggled. But, one piece of advice she gave that gave me immediate results was to watch the ball right to the point of contact with my racket. It worked.

She gave me the what, where, why and when in her instruction around vision. We, as basketball coaches, need to do the same within the context of our drills.

What do you want your athletes looking for?  Be specific.

While traveling with Canada Basketball in Europe, I had several opportunities to wrestle and discuss teaching with two solid basketball minds: Mike MacKay (Manager of Coach Education) and Rich Chambers (Canadian U19 women’s national team coach).

Now, in previous posts I’ve gone on about the insights gained from my boy MacKay; but, I’ve also learned a tremendous amount and been inspired by Coach Chambers too. He is a whiz and an encyclopedia of knowledge for the game.  Richie has probably forgotten more than I’ll ever know. What I admire most is that he never stops learning, toiling with ideas and challenging thought. I hope to also maintain that type of child-like thirst for knowledge after being in the game for as long as he has.  (If you find yourself in British Columbia, Canada, look up Coach Chambers!).

As became custom each night in Slovakia during the women’s FIBA U19 World Championships, Richie would strut into our room late at night and throw some basketball topic out there and we’d dig in and debate it. One night, the topic migrated over to what should be taught first: vision or technique.

Coach Chambers netted out with the position that the two are married. Vision without skill, does not make a basketball player. Point taken. He is right there.

Vision, to me, is a precursor to decision training. It’s an ESSENTIAL, TEACHABLE SKILL that must be developed at the introductory level.

That’s my position. This notion of how to teaching decision-making in our athletes is often overlooked and falls to the way side. 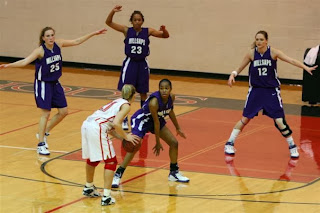 In working within our Canadian National Team development program, called the Centre for Performance, we’ve begun using specific visual cues in our instruction. We’re moving away from auditory cues to visual ones to encourage and assess the athlete’s ability to scan and react with speed—while executing their skills.

For instance, in working on ball-handling, we’re working to always use a coach or ‘guided defender’ to provide a visual cue. Imagine lining up a group of athletes at half court and having them penetrate with speed at a coach awaiting at the 3-pt line.  At the coach’s discretion, they’ll raise either their right or left hand. The athlete then must respond by executing a dribble move to attack opposite of that hand.  (The hand mimics a defender jumping left or right.)

A simple exercise, but one that provides a much more accurate assessment of vision within more game-like conditions.  That is, if the athletes executes their move, with speed, quickly after the cue has been given, they’re attacking with their eyes up (with sight of the defense).

We would then progressively load this same penetration drill adding the second line of defense, third, and fourth.

In my opinion, an average player can beat their own defender.  That’s not special.  A good player can beat theirs and breakdown the second line of defense; a special player blows by theirs, engages but remains un-phased by the second, makes the right read on the third to create for themselves or a teammate.  That’s special.  That, requires vision. Also said… that’s what makes Steve Nash the 2-time NBA MVP.

It can all be taught.