Vision Combined With Technique Is The Great Equalizer

Milos Teodosic has been dropping these kinds of dimes for years.

What he has improved, and what isn’t readily available to every player, is how he passes (e.g. underhand scoop pass, wide body hook-wrap-pass-with-spinology, etc). Those are “next level,” yet there’s one thing that he does consistently that is available to *all* players: what he does before the pass…!

Did you catch it? Watch it again. He sneaks-a-peek. It’s especially obvious on the no-dribble and 1-dribble passes. He’s also doing it on the live dribble passes too.

The average fan falls in love with the delivery. To the student-of-the-game, it’s what happens before the delivery that makes his playmaking special. Teodosic’s control of his eyes ( 👀…!) is brilliant. It’s how he peeks *before* the pass that sets him up to decide what to do once he gets the ball. Beautiful. Perception-action at his best. (Watch it again. Look for the head swivel before he gets the outlet.)

Each player, should ‘peek’ *before* the catch, *on* the catch, then again *after* that ball leaves their fingertips (either on the pass or dribble). And, as my peeps at PGC Basketball would say: You should ‘peek immediately—especially when it’s inconvenient’.

The ability for players – with and without the ball – to separate their seeing from their doing is an underrated skill set. It’s a habit of play that underpins all the individual technical (and movement) skills. The risk posed by doing skill training – primarily – in isolation is that the texture and nuance that comes from helping a player understand how each their vision / decision / actions interplays with their teammates, based on how they’re being defended, is stunted.

Vision when combined with technique is the great equalizer .

ICYMI… Here’s an interview I did with John Leonzo where I peel back the layers a bit more. 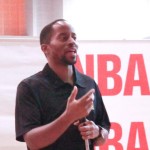