3 Ground Rules That Set Raphael Nadal Up For Success 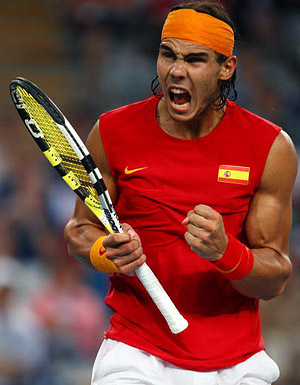 Thought by many to be the greatest tennis player of this generation, Rafael Nadal‘s story is atypical to that of most stars in sports.

The “great irony” of Rafael Nadal, as journalist Jeff Pearlman calls it, is that he’s a “singularly relentless player… But it’s not his forehand or his backhand; it’s his will. He just wants it more than anyone else. No one comes close to matching his killer instinct.”

Contrast that with the fact that when the match ends, Nadal morphs back in to a stoic, humble and grounded version of himself. Writes Pearlman:

“He lavishly praises opponents. He never cites injury as a reason for his rare defeats. Asked recently if he perceives himself as tennis’s new king, he winced. ‘Before the match you are who you are, and after the match, you have to know who you are too. You are the same, no?'”

I’ve always had interest in Nadal as an athlete. But when Jose Calderon, Spanish basketball’s ‘Conquistador’, spoke of his reverence for the person that is Nadal, I took note.

Just Who Is Rafael Nadal?

I’m not sure I’ll ever fully be able to answer that question. However, Pearlman wrote an good article on Nadal, that sheds light why tennis’s ace is who he is.

[ Read the full article: Not Your Typical Tennis Pro ]

What jumped out to me in this article were the three ground rules that his coach, and uncle, Toni laid out for him as preconditions. Here they are:

Simple. Clear. Backed by values of the game—and life.

There’s more to Nadal than this list. However it lays a foundation for expectation that forms the backbone of all that he faces.

“My focus is to win the next match I play. The [history] will happen. Or maybe it won’t.”