I eagerly and excitedly write this post to you. It feels like an inordinate amount of time has passed since I last wrote. And, in looking back, there has been. For good reason though… I took some time with ‘my better half’ to travel. London with the fam did not disappoint; good times that included me hustling to hold the attention of 150 seven to eleven year olds in an assembly at my mom’s grade school. That was quickly followed by sensory overload as we vaulted our selves to Morocco (North Africa).

The last leg of the journey took us to Paris, France. Wow… truly a city of describable beauty. I just don’t have the words to articulate it yet. I was reminded, while there, how truly small the world is as I was able to connect with my man, and solid coach, Sam Ferry, while there. Sam, at the time, was on leave from his duties with the Vanderbilt men’s basketball team to do a study tour. [Great seeing you, Sam! I’m crossing my fingers for Coach’s sake that you don’t get snatched up by some Parisian beauty and never return.]

A week later, I’m back (home) in Toronto in my old hood, Bloor West Village, writing from a Starbucks! The nomadic life begins again and I think my sense of enthusiasm and appreciation for these moments comes from an eventful near-death driving experience going from Erfoud (southern Morocco near the Sahara) up to Fes. (That’s another story, but word for the wise: Do not take a 7+ hour drive through the mountains of northern Africa with a driver who only speaks Arabic during the middle of Ramadan!) The good news is that I feel that much better prepared to tackle my goal of participating on the show, Amazing Race.

Right now, I’m on my way to Ottawa (Ontario, Canada) for the Toronto Raptors training camp. I’m really looking forward to connecting with all my old NBA colleagues and doing some professional development during the week. It’ll be a lot of fun. 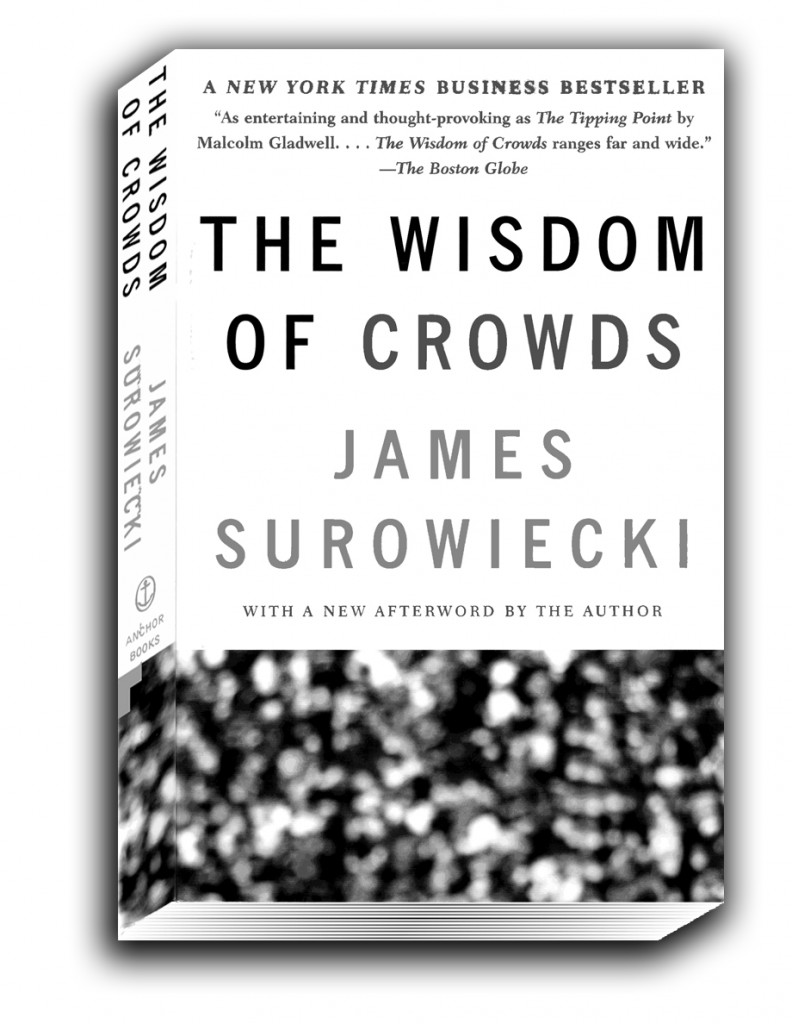 One of the things about traveling that I thoroughly is the opportunity to read. I just dove into a new book called “The Wisdom of Crowds” by James Surowieck. Not sure what attracted me to this one, but I grabbed it over a year ago and have had it buried in a box since moving from Canada. During our hurricane prep, I rediscovered it and brought it on the trip.

The premise of the book is that: “Large groups of people are smarter than an elite few, no matter how brilliant – better at solving problems, fostering innovation, coming to wise decisions, even predicting the future.”

Huh?! Was my thought when I stumbled across it – both times.

I, like many, have subscribed in many ways to the conventional notion of ‘groupthink.’ In the dictionary, groupthink is described as the practice of thinking or making decisions as a group in a way that discourages creativity or individual responsibility. It’s the notion that when a group is too much alike – in worldview and mindset – they easily fall prey to poor decision making.

As argued in the book, this trend occurs because the more cohesive and homogeneous a group is (and becomes), “…[the] more dependent on the group people become, the more insulated from outside opinions they are, and as a result, the more convinced that the group’s judgment on important issues must be right.” These kinds of groups, Surowieck says, “share an illusion of invulnerability, a willingness to rationalize away possible counterarguments to the group’s position, and a conviction that dissent is not useful.”

“Fascinating?!” I thought after reading this.

Think about all the roles we play in this game. Here are a few: basketball coach responsible for athlete selection and assembling a coaching staff, administrator/manager responsible for making policies around programming, and even the more informal role of decision-influencer as we sit on various boards or are consulted for our opinions on various issues.

We’re either assembling groups, participating as a member of a group and/or seeking the opinion of a group. We spend a lot of time in groups. Or, at least, are influenced by the decisions of a group of some sort whether it be in sport, work, politics, education, etc… etc.

I guess what jumped out to me when I cracked open this book was: Who is really better at making decisions? The individual or a collective…?

In 2004, a FIBA instructor, named Mario DeSisti, came to Canada an led a coach development session where talked about how 20 years ago in Italy – where he’s from – four people got together and determined the how basketball was going to be taught and how it was going to be played (style of play). Four people… that’s it! And, from there, all decisions were influenced by the vision set out by those four.

One of the challenges I’m discovering as I cross the country, is that we have a lot of people teaching skills a lot of different ways. Some skills, I’d argue, should be agreed upon. Shooting, to me, is one of them. There are far too many people teaching this skill in far too many different ways. Like most, I have my set of beliefs. And, I’d venture to guess that for every 100 coaches you could find, there are 89 different beliefs on how it should be taught.

I’ve spend the past 2-years studying this skill; talking to coaches from the NBA level on down. Each teach shooting differently and has their own idiosyncrasies. Further, on any given team, you could have a 2-4 assistant coaches who teach this same skill differently. As a band-aid solution, to remedy this, many coaches will not allow anyone but themselves to teach or correct shooting with an athlete; or task one specific assistant with the duty.

Now, think for a moment about the plight of an athlete. How many different coaches will most athletes who play for? Elementary school… youth club/travel team(s)… middle school and/or junior high… high school… travel/AAU/provincial-state teams (cause they play on multiple!)… college/university. Haven’t even touched on a kid who may be identified as a future national team prospect. And, in all probability, that athlete is receiving different interventions/corrections and points of emphasis from each.

Now imagine the athlete who is playing on multiple teams at the same time. Not only are they receiving different feedback, but they could be getting it all the same time!

My brain is hurting thinking about it. Can’t imagine their – mental and muscle – confusion.

If you follow my logic, the conclusion is pointing toward achieving consensus – especially on this skill. But, who decides? Should it be one individual or a collective? If the latter, who should be included in that collective?

I don’t have an answer to this question. I’m still searching. Admittedly, to expedite the process, I tend to lean in the direction of adopting the approach of the Italians where a small panel decides. What we’ve been doing in Canada, to this point, hasn’t yet gotten the results we’re shooting for (no pun intended, really).

Back to the book… It’s offered up that a group is far better at problem-solving than the individual. The author goes on: “…individual judgment is not accurate or consistent enough, and therefore, cognitive diversity is essential to good decision making.”

As coaches, we often fall prey to doing things because that’s the way they were done before us. For many, the norms under which they played is the starting point for who they become as a coach. (And, for some, and end point too!). We often teach the way we were taught. Our viewpoints for the game were shaped by our coaches. And, for the most part, there are no radically different stances amongst the coaching fraternity in North America.

Yes, some believe in man-to-man over zones. Full court forty-minutes-of-fury-type defense, while others side with a pack defense complimented by a walk-it-up-execute-milk-the-clock-type offense. And, most subscribe to the notion that defense wins championships – although high score still wins.

Those who’ve been around the game longer than I have lived will say that there are very few original ideas. Just variations of old things. Ask the NBA teams of the 80s if Mike D’Antoni’s “7-seconds or less” offense is a novel concept. Similarly, the Memphis dribble-drive offense is not a unique strategy or tactic.

There are few groups out there that are more homogeneous than us; the North American coach, that is.

Here’s a line from The Wisdom of Crowds that resonated with me: “Groups that are too much alike find it harder to keep learning, because each member is bringing less and less new information to the table.” The author, Surowieck, goes on to suggest that the more similar people in a group are, the more similar the ideas they appreciate will be. For the longest time, the game has been dominated by ideas that were born on these shores. As such, we salvage and re-purpose old knowledge and ideas. Always turning back to the same sources for information.

I’d take a shot in the dark and suggest that one thing we all could agree on is who the top eight basketball minds are, ever. No doubt, they’d all be American – and most will have been coaching sometime in the last few decades.

“One of the quickest ways to make people’s judgments systematically biased is to make them dependent on each other for information,” urges the book.

[SB: This is a long post… sorry if you’ve made it this far. You typically get my long ramblings when I’m toiling over an idea – hopefully – on the verge of a breakthrough. Let me wrap this up…]

Surowieck indicates that there are four conditions that satisfy a wise crowd (group): “diversity of opinion (each person should have some private information, even if it’s just an eccentric interpretation of the known facts), independence (people’s opinions are not determined by the opinions of those around them), decentralization (people are able to specialize and draw on local knowledge), and aggregation (some mechanism exists for turning private judgments into a collective decision).”

You want diversity among people who are coming up with ideas, so you end up with meaningful differences among those ideas rather than minor variations on the same concept. The upside to a diverse group is that it expands a group’s set of possible solutions and allows the group to conceptualize problems in novel ways. “Diversity and independence are important because the best collective decisions are the product of disagreement and contest, not consensus or compromise.”

Let’s continue to strive to achieve ‘cognitive diversity.’ We are doing some things very well; others, not so much. Until we expand our reference points we will be handcuffing ourselves and limiting the possibilities for solutions.

I’ve got more reading to do in the book and am very excited to continue to take in training camp next week. Off to diversify my mental portfolio.