Steve Nash: What Makes Him Tick 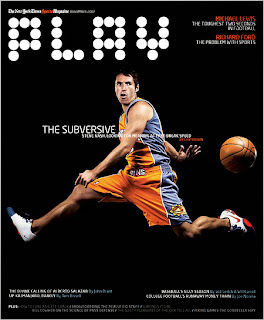 I’m going to try, with great effort, to keep this one short…

Check out NYtimes.com Play Magazine. It’s a well written article on Steve Nash; more so, about who he is off-court and part of what makes him tick.

In it, the author Chip Brown asks Nash what drove him, beyond the obvious goal of a NBA championship:

“I don’t know,” he said. “I have a lot of energy and a lot of motivation. I have a hard time sitting still. I guess in a way I can’t live with the alternative to being driven, which is sitting around being bored. If I’m going to go for something, I’m really going to go for it. I think I realized as a kid that I would keep going when other kids stopped. If my legs are there, if my quickness is there, I can have a good game. If not, I try to find other ways of making plays without being quick. Making smart plays. Making the game simple.”

I also liked this commentary from Suns Coach, Mike D’Antoni:

“I’ve always said when Steve retires, I’ll retire,” Coach Mike D’Antoni said. We were sitting in a little gallery off the practice court watching the scrimmage. “I don’t want anyone to be able to figure out whether our success is because of my system or Steve’s ability to make it work.”

D’Antoni makes light of Nash’s role in the success of the Phoenix Suns’ style of play. Some may shrug it off, but I say, don’t.

D’Antoni is right. He should. Let’s keep it real. And, he knows it.

D’Antoni by all accounts is a superb tactical coach. I was at an NBA practice a few weeks ago talking with a NBA Development League head coach who has played and been around the NBA for decades. I asked him who, in his mind, were the best teaching coaches in the League. Without hesitation, he says: “D’Antoni. (Lawrence) Frank.”

He went on to say (paraphrasing here), ‘…nobody is doing, in the League what D’Antoni is doing and Frank is just so organized and precise in his planning.’

To be honest, I wasn’t surprised by him mentioning either coach. I ask that question a lot of guys around the NBA the same question and those two names popped up regularly.