The Iceberg Illusion & Why Mistakes Matter

Success Is An Iceberg

We often get mesmerized by someone’s above the surface success and don’t factor in all the below the surface opportunity-costs they paid to achieve that success. 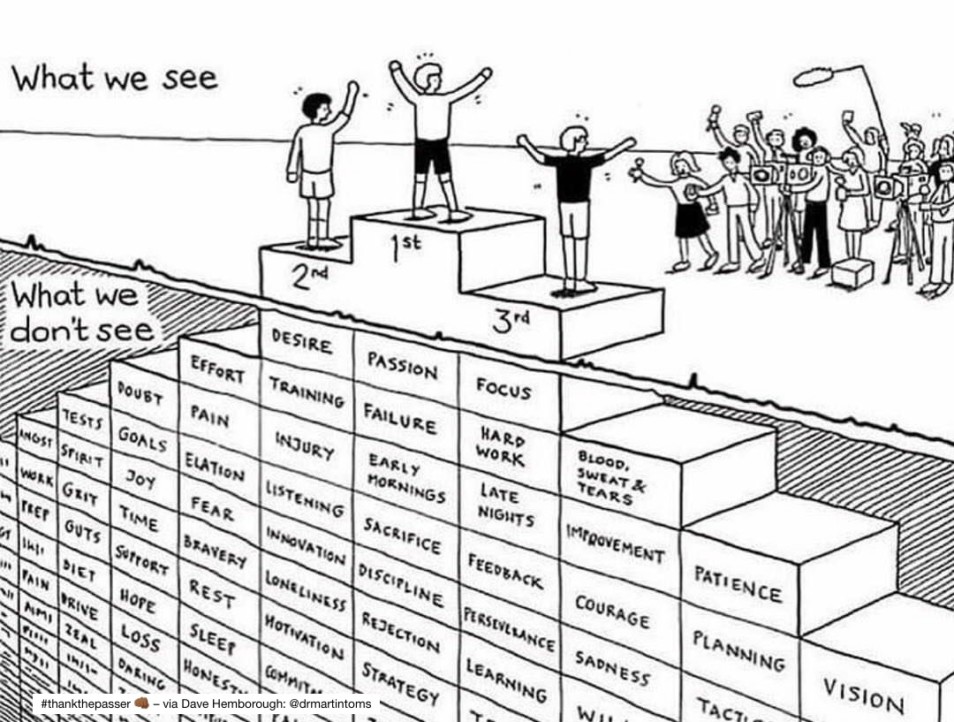 You see… the hyper focus on outcomes is one of the biggest failings (or façades) that comes from social media. It creates a false impression of what leads to success.

We see the success, but not the work that went into it… The unseen hours, necessary failures, setbacks, crises of confidence, the not-now’s (to the countless asks), the loneliness, the late nights and early mornings; and, all the wobbling that comes before the walking—much less running.

I love how David Perell put it:

We see trophies, not sweat.
We see diplomas, not homework.
We see performances, not rehearsals.

Social media gives you the highlight reel. It blows up all the endless made shots (😏); rather than including the misses that preceded it .

Enjoy the long slow walk to greatness. (Teach your athletes to do the same!) And, as Abby Wambach put it, “MAKE FAILURE YOUR FUEL“.

The iceberg doesn’t move quickly. It’s not sped up. It just moves consistently; at often a barely discernible speed.

The Hidden Logic of Success

In Mathew Syed’s book, Bounce, he beautifully sums it all up:

“When we witness extraordinary feats … [of sporting or artistic prowess], we are witnessing the end product of a process measured in years. What’s invisible to us—the submerged evidence, as it were—is the countless hours of practice that have gone into the making of the virtuoso performance: the relentless drills, the mastery of technique and form, the solitary concentration that have, literally, altered the anatomical and neurological structures of the master performer. What we do not see is the what we might call the hidden logic of success.”

Great performance isn’t the result of special abilities. Those who think that only know about the final product and observable results. If they’d seen the painfully slow, inch-by-inch baby steps, they wouldn’t be in such awe.

The ‘hidden logic’ is that the invisible lays the foundation for the visible.

Onlookers don’t see the roots of the tree. How deep they are. How the roots bow and bend underground as they overcome obstacles – and that those unpredictables are what gives the tree its resilience.

Onlookers only see the visible: how big the tree is.

Those of us ‘in the arena,’ know better.

If athletes are going to get better, they have to be allowed to make mistakes.

When athletes are making mistakes they are flagging a growth opportunity. And, as frustrating as it might be (when we get caught up in winning today), it’s the learning that can come from the mistakes that sets them up for future (bigger) successes.

Despite your persistent resistance, and desire to control, we are hardwired to be ‘professional stumblers‘. Fact is, that’s how we all learn: by doing. Athletes can’t get better at something if they’re not allowed to do it.

As coaches, we rob kids of opportunities to grow when we say they can’t do it. Or, you don’t *design* more opportunities for them to be in that same situation again (to make more mistakes).

Celebrate their mistakes. Spotlight your mistakes.

(Here’s a prime example. Amy Janjgava spotted a sign posted in a school that says: “Mistakes are: expected, respected, inspected, and corrected!” Talk about creating a culture of error! 🙌🏾)

Sounds a bit crazy. Yet, if you really care about succeeding a lot, that means you’re going to be putting yourself out there a lot. And, inevitably, you and your athletes are going to have to get used to failing a lot.

I know, it all seems counter-intuitive (erm… counter-sports-culture-ish). It’s not. We’ve just been drinking the (social media laced) kool-aid that mistakenly wants you to believe that high performance is something mystical.

The kind of practice (or approach) that is most valuable, but rare, is the practice of embracing failure. Of working at something over and over again; and not succeeding —until you do.

We become through the practice of embracing errors.

We’ve seduced ourselves into the mistaken belief that great achievements ‘spring forward fully formed’. Quite the contrary. You have to practice your way into it.

Is great achievement possible? Yes… if you’re willing to fail your way into it—and allow your athletes to do the same.

It’s not the mistake. It’s the mistake response. It’s the process rather than the end product. At the end of the day, those are the only things we control.

Live it. Coach it.