Sharing The Thinking With Your Players 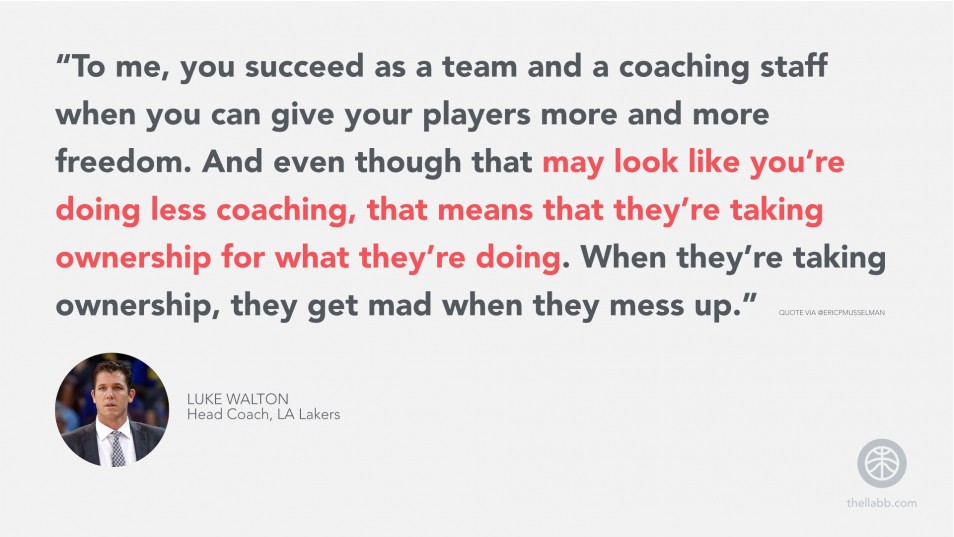 I agree with the basic premise of the quote; yet, I think we can go deeper.

Think about replacing freedom with responsibility. As the saying goes, ‘with freedom comes responsibility’. (I don’t think Luke will be upset. Let me explain…)

Freedom is vague. Responsibility implies accountability. And accountabilities lead into specific actions that are observable and measurable.

It’s widely accepted that a core component of coaching is teaching. Yet, how do we measure the progress of the team in learning?

Me? By continually working to create a clear(-er) picture of what the process and outcomes of learning look, sound, and feel like.

Shifting The ‘Thinking’ To Your Players

One of the ways you can measure the growth of your team is by continually assessing how much of the cognitive work (i.e. the thinking) that your players are doing versus you and your coaching staff. Effective teacher-coaches fight for a culture of learning by gradually shifting – or, better said, sharing! – the cognitive load with their players.

The more and more your players begin to occupy the same cognitive domain as you, the better your team will be.

Let me give some specific examples:

The ability to think the game is a teachable skill. What jumps out to me from Walton’s quote is that this a stated intention of giving ownership of the team’s success to the ones that have the most control over it: the players.

What other examples are there of players demonstrating a high basketball IQ? How do you shift ‘the thinking’ to your players and teach them to take responsibility for the team’s success?