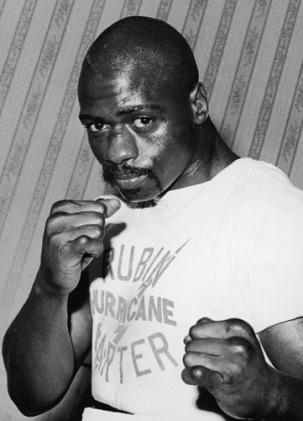 As a teen, I was capable. I knew it. Yet, like so many others, the harsh reality of the success equation is that ability without application is empty.

I coasted through my latter years of high school; only doing what was minimally required to get by. Most of my teachers allowed me to operate at this level unchallenged. At times, in fact, I would rationalize away my lack of effort because I didn’t think my teachers were doing an effective job of inspiring me to want to perform in their class. As if to say: “If I’m not excited enough to give my best, it’s your fault.”

Talk about getting it all twisted.

Well, that mindset found me transferring schools and repeating my senior year of high school.

What changed? What was my ‘blink’ moment when I saw my reality (and capabilities) differently?

Nope. I got hit by a hurricane.

In the winter of 1993, Rubin ‘Hurricane’ Carter showed up at my (then new) high school. At the time, I had no idea who this cat was.

But, when his booming voice came through the mic and cut through the loud, standing room only gym, it was if he was speaking to me directly. His story, his path, his perspective on life after almost twenty years of wrongful imprisonment captivated me. He was so positive, so spirited and unflappable… so energized and so fiercely determined to contribute. Amazing, I thought.

After the assembly, I found myself standing outside the gym with about five other guys on the basketball team waiting for people to clear out so we could shoot around in the gym.

Mr. Carter emerged. He didn’t just casually walk by us. No, he stopped.

And… It was the next five minutes that changed the trajectory of my life. He changed my approach. My perspective. He was a difference maker.

His words, in that moment, too personal to share, ignited me into action. I learned two valuable life lessons from The Hurricane that blew me off my feet in those brief minutes: (1) passion persuades, and (2), persistence pays off.

Because of Rube, and the many others who’ve influenced me, I am now positioned to impact others, positively. A beautiful burden that I do not take lightly.

I look forward to contributing and being a difference maker for others the way Rube was for me.

It All Came Full Circle

In 2001, I was working for the Toronto Maple Leafs Hockey Club. We were attending a fundraising breakfast for the Canadian Special Olympics. (An amazing annual fundraiser for an important cause.)

Unknown to me, the headline speaker that morning was The Hurricane. I nearly jumped out of my seat when I found out!

Just like in the first encounter, he spoke so movingly about possibility and an unwavering commitment to your dreams—in spite of the barriers others may put in front of you. Again, a vision of dignity and resilience, his speech was riveting and impassioned. And, after all the formalities were done, I waited patiently at the end of a line of about one hundred, or so, people who were seeking his autograph.

As nervous as I was when he spoke to me outside the gym as a teenager years prior, I now looked him in the eye, this time as a young man. Hands white knuckled in my pockets, gratitude pushing me to the verge of tears, the words oozed out:

“Mr. Carter, I wanted to come to you personally and say thank you as you changed my life. You won’t remember me, but about eight years ago you came to my high school…”

Interjecting with a piercing glance, Mr. Carter said, “We spoke, after the assembly. You were there standing with a basketball and a group of kids waiting to get into the gym. Son, I remember.”

I went on to give him back those five minutes. The ones he gave to me years ago. In it, I eagerly and excitedly recounted, my life’s journey… university degree, team captain, athlete mentor, WNBA, NBA, NHL, motivational speaker, teacher-coach… So many things all inspired by a few words and a note that he wrote to me.

(I laugh now because in looking back, I was like a three-year-old fumbling and tripping over each coming word, barely able to get the preceding one out of my mouth quick enough.)

I’m a living testament that…

Thank you again, Mr. Carter, for being a difference maker. I wish we could meet again for another five minutes. Your small act made a big difference.