Stepping Away From Basketball 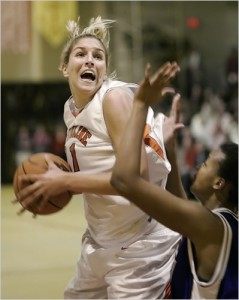 I had this article from the NYTimes.com sent to me from a couple of people and thought it best to share. It’s the story of one athlete, that is the story of so many others.

New York Times – “Delle Donne was the nation’s top female high school basketball recruit, a signee with the University of Connecticut, an expected central figure in what many predict will be the Huskies’ sixth national title season in 2008-9. After two days of classes…, Delle Donne acknowledged what few athletes of her visibility have ever acknowledged publicly — she was burned out on basketball at 18.”

“At Pinnacle, Stepping Away” is an interesting read. You could easily sub out Delle Donne’s name with thousands of other athletes who’ve been burned out from sport. The statistics on youth sport drop out are staggering(…!).

What has the commodification of the sport done to our athlete’s enjoyment of the game?